Girls To The Front by Sara Marcus by Verena Spilker
review

In 1991, when the first Riot Grrrl meetings took place in Washington, DC, I was eleven, went to a new school and just started learning English. I had never heard of Riot Grrrl and it took almost another ten years until I would. But, like so many others, I was amazed by this movement from the moment I heard about it. The idea that there were other girls out there that are playing in bands and doing so many other great things, and most of all did not seem snobby about it, but were instead encouraging other girls to do the same, was quite new and exciting to me.

Still wishing that I had found out about Riot Grrrl way earlier, it changed my life nonetheless, and I guess this site wouldn’t be here without the foundations set by that scene.

Girls to the Front – The True Story of the Riot Grrrl Revolution by Sara Marcus caught my interest from the first page on. Starting off with her personal story of feeling alienated and isolated by the people around her and experiencing threats from boys, she found out about Riot Grrrl in 1992 through a Newsweek article that marked an important point in the history of Riot Grrrl. Happy to see that there were other teenage girls who did not feel comfortable with society’s treatment and expectations of females, she then began a journey of finding out who these Riot Grrrls were and how she could become one of them. Sooner or later she too started a band and wrote her own zines, and eventually also experienced the movement’s decline.

While spending the last five years doing research and writing, conducting over 150 interviews, she created a book that captures you from beginning to end.

More than ten years later, afraid that this important time in her and so many other people’s lives might not be documented with the necessary acknowledgement and respect, she once again set out to track down the original Riot Grrrls. While spending the last five years doing research and writing, conducting over 150 interviews, she created a book that captures you from beginning to end.

The last week, while reading Girls to the Front, I could hardly think of anything else. There were these first moments of enthusiasm and then so much disappointment. The characters all became so real to me that I kept wanting to know what was going to happen next, even if it would disappoint me. Sara Marcus managed not only to document this important part of history and made it come to life right in front of me, but she was also able to describe all those psychological barriers that you have to face once you start something new and possibly great. There were people like Kathleen Hannah, who seem to be natural leaders, people that put the common goal before anything else and that were then being disliked for wanting too much attention. But who else would have done it if not her?

I will leave out the details of the events and characterizations here as to not spoil the story: how Bikini Kill got together, how REM changed the lives of the members of Heavens to Betsy and why Bratmobile finally broke up. You will have to explore that for yourselves. I can just say that Girls to the Front brought together all the bits and pieces I had heard and read about Riot Grrrl before and made it become a cohesive yet multifaceted story.

the fans as well as zine makers, the people who set up the shows – they are all equally important

There were two points Sara Marcus made that I especially liked and that have a high importance, not only looking at Riot Grrrl but also other youth- or subcultures. And even though they might not seem new, they hardly ever seemed so evident. The first one is that even though a scene is considered to be a musical scene, it does not only consist of the musicians, but also all the people around them: the fans as well as zine makers, the people who set up the shows – they are all equally important because none of them could keep the scene going without the others. And this symbiosis also leads to the second point, because this kind of a community based scene is something that can inherently only work on a subcultural level, where at least in theory, all people are equal. Even though the book shows in detail how complicated and maybe impossible it is to actually keep such a system going, how there are always disagreements and power struggles, it is also clear that in the mainstream you can only find “ultra-homogenized and über-marketed holographic projections” of the underground, but never the actual thing. And this is something we have to realize and keep in mind and learn from the experiences the first Riot Grrrls made.

A Newsweek article, a nation-wide TV coverage or other documentations by outsiders might transport some of the original ideas and help spread progressive values, but it also leads to the absolute breakdown as it only shows the “sellable” parts and therefore creates an imbalance within the community and furthermore leads inevitably to an identity crisis. If you create something very personal, something that is in opposition to the mainstream media, as soon as it enters that context, it gets blown out of proportion and most important the control is taken out of your own hands.

In 1989 three young students in Olympia decided to form a band so that their voices would be heard. While touring they experienced the need for an approach to feminism that was more appropriate to their age group, and the possibility for girls to support one another. The first weekly mini-zine under the title riot grrrl was published in Washington DC in the summer of 1991 and was followed up by a meeting that should start a new grrrl revolution. From the first Riot Grrrl chapters in DC and Olympia to Portland, Omaha and so many other places, the New York and DC chapters were the ones that held up til 1996. But even though the regular meetings stopped and the initial bands broke up, Sara Marcus makes clear that the movement did not stop. It goes on through self-organized festivals like the Ladyfest or Homo A Gogo, the people who once belonged to the different Riot Grrrl chapters might have chosen different names, but the idea of self-empowerment never died.

Starting off twenty years ago as a movement that gained attention through word of mouth propaganda, the internet makes communicating a lot easier nowadays and information more accessible, not only in the US, but also in a global context. And we should take advantage of this powerful tool. The ways girls and women, and also so many other people who are not white male heterosexuals, are presented in magazines or TV shows and treated by their parents and society in general has hardly changed.

I sincerely hope that you will read and enjoy this book as much as I did and use the energy that you will gain from doing so in a creative way and start telling your own stories, founding your own zines, bands or radio shows, because there is still so much to fight for. It’s in your hands. 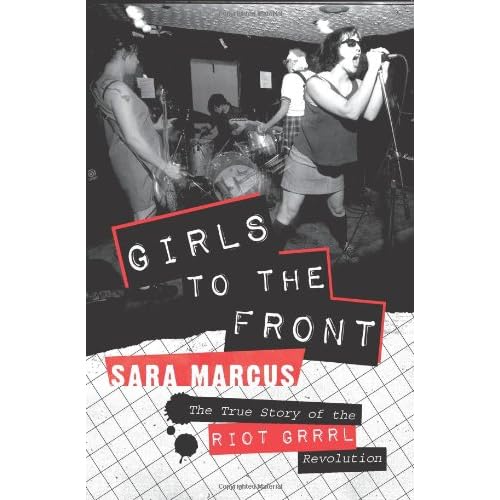 Cover of Girls to the Front

This is what Kathleen Hanna says about the book:

This website uses cookies to improve your experience while you navigate through the website. Out of these, the cookies that are categorized as necessary are stored on your browser as they are essential for the working of basic functionalities of the website. We also use third-party cookies that help us analyze and understand how you use this website. These cookies will be stored in your browser only with your consent. You also have the option to opt-out of these cookies. But opting out of some of these cookies may affect your browsing experience.
Necessary Always Enabled
Necessary cookies are absolutely essential for the website to function properly. This category only includes cookies that ensures basic functionalities and security features of the website. These cookies do not store any personal information.
Non-necessary
Any cookies that may not be particularly necessary for the website to function and is used specifically to collect user personal data via analytics, ads, other embedded contents are termed as non-necessary cookies. It is mandatory to procure user consent prior to running these cookies on your website.
SAVE & ACCEPT